“Whereas the persons hereinafter named, with a large number of others in Quebec and elsewhere in the Province of Canada, have associated themselves for the establishment of a Club for social purposes, and whereas certain of the said hereinafter named persons have prayed to be incorporated by the name of the “Rideau Club,” of the City of Ottawa, and it is expedient to grant their prayer, Therefore, Her Majesty by and with the advice and consent of the Legislative Council and Assembly of Canada enacts …”:

With those words, the history of the Rideau Club commenced on the 18th of September, 1865. The Club thus predates Confederation by 22 months, and the establishment of Ottawa as the centre of Government by a month. 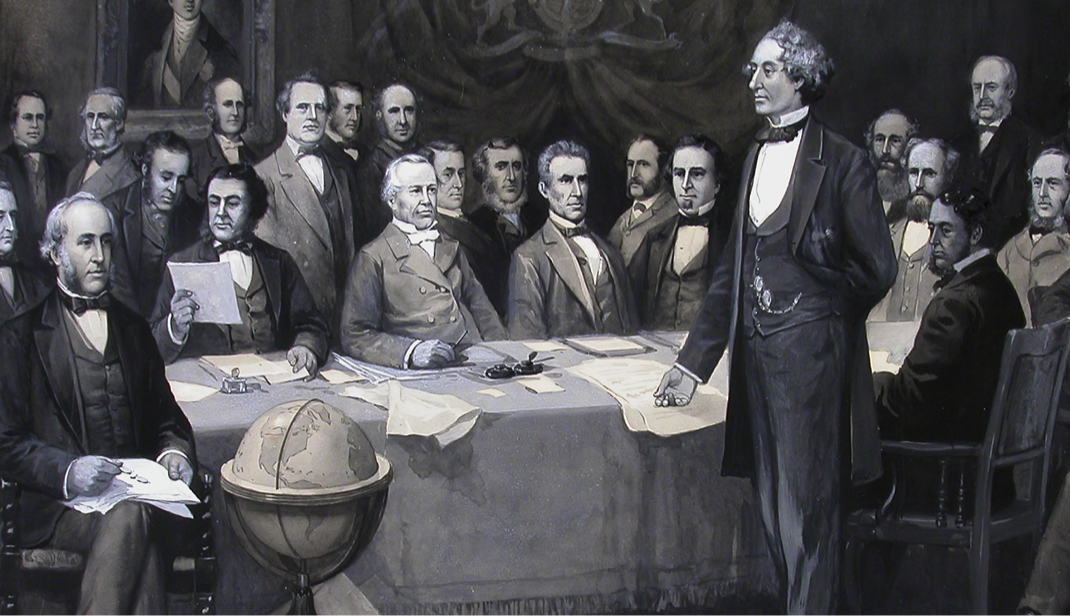 The formation of the Club was an initiative of Sir John A. Macdonald and George Etienne Cartier, and, inter alia, the Honourable Hector Langevin, the Honourable D’Arcy McGee, the Honourable M. Laframboise and Casimir Gzowski. Sir John A. Macdonald was the first President, and, two years later became the first Prime Minister of the Dominion of Canada. While the earliest minute-book of the Club available commences in 1867, it is reasonable to assume that many of the discussions leading up to Confederation on July 1, 1867 took place within its precincts.

The Club, from its inception, had a distinguished membership, which continues to this day. Besides Sir John A. Macdonald, two other Prime Ministers, the Right Honourable Sir Robert Borden, PC, GCMG, and the Right Honourable Lester B. Pearson, PC, CC, OM, OBE, served as presidents of the Club. Today, the Governor General of Canada, the Prime Minister, the Speaker of the Senate, the Speaker of the House of Commons and the Chief Justice of Canada are Honourary members of the Club. 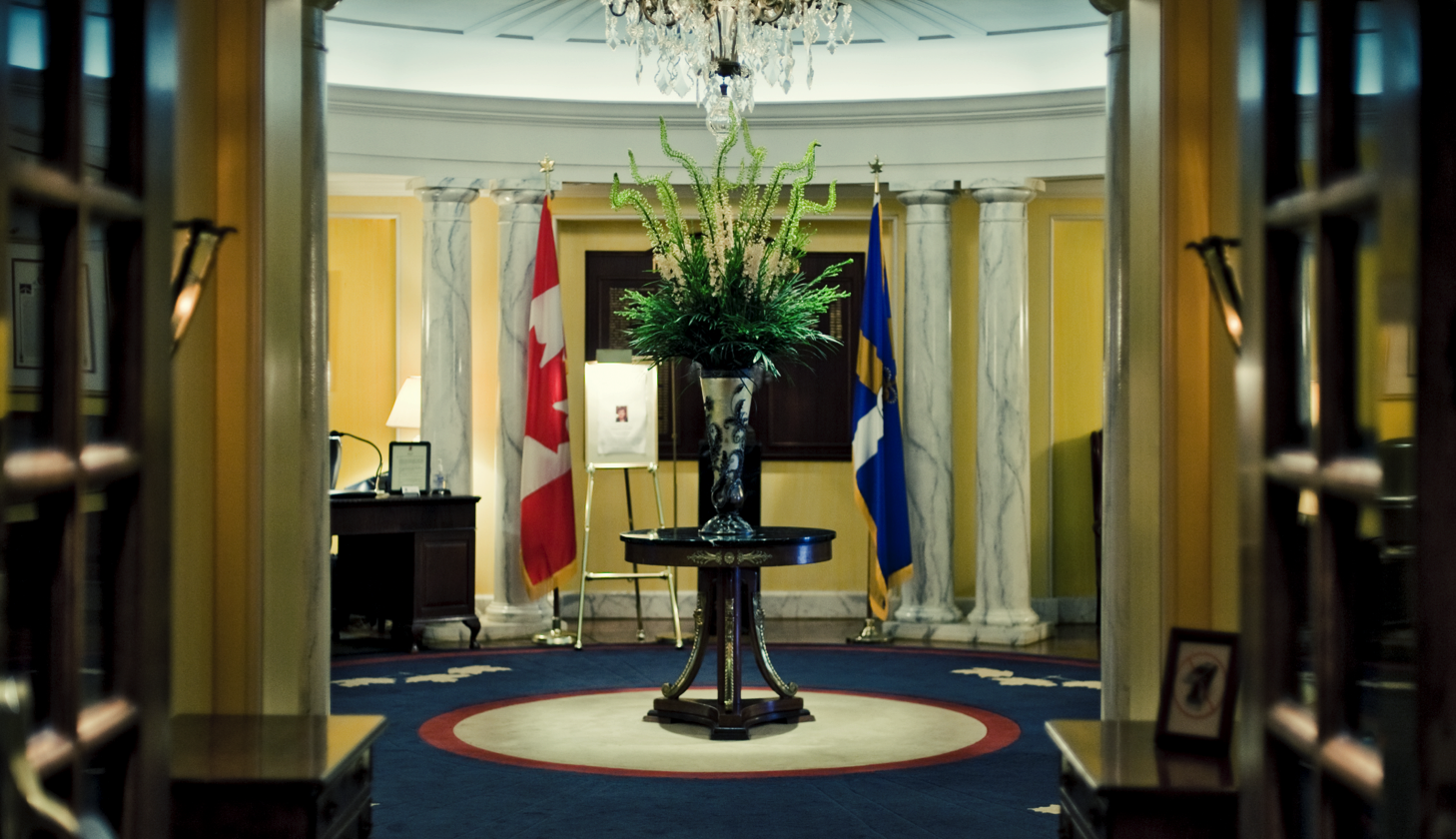 During its history, the Rideau Club entertained many distinguished visitors. On September 21, 1901, for example, the Club hosted a luncheon for his Royal Highness, the Duke of Cornwall and York, later His Majesty, King George V. More recently, Prince Philip, the Duke of Edinburgh, has also visited the Club, as have Governors General and Prime Ministers.

The first permanent Club building was constructed in 1875, but by 1911 the membership had outgrown this facility. Accordingly, a new building, on the corner of Wellington and Metcalfe Streets was constructed in 1911 and remained the home of its members until a fire destroyed the elegant edifice in 1979. The Club subsequently established new premises at its present location on the 15th floor of 99 Bank Street.

The Club is very conscious of its role as a unique repository of Canada’s political and commercial history. Regrettably, most of the original documents in the Club archives were lost in 1979. However, the Club has and will continue, to endeavour to act as custodian of current events.

The city was brimming with taverns, public houses, boarding houses and other less regulated establishments.

The Rideau Club was founded to provide a respectable place to eat, drink and engage in a gentlemanly game of billiards or cards.

The Club was granted Royal Assent by the Governor General on September 18, 1865, less than one month from its original introduction into the legislature.

Thirteen of the ‘Fathers of Confederation’ can be found on the original petition requesting incorporation of the Rideau Club.

Originally there were 3 types of membership: ordinary, privileged – living more than 5 miles from Ottawa and Honorary – Governor General and other dignitaries.

The Club’s first location was 200 Wellington Street in an unused portion of Doran’s Hotel.

The British colonies of Canada, Nova Scotia, and New Brunswick were united into one Dominion of Canada.

The Club moved to the Queen’s Restaurant at the corner of Wellington and Metcalfe.

The Club almost closed in 1871. Although the price to be a member was high, $80 entrance fee plus $20 annual fee; the annual family income was only $250 at the time. The Club struggled on may occasions to cover their expenses and were required to sell assets such as furnishings and wine stock to meet their financial obligations.

The Club purchased 84 Wellington, a Victorian Clubhouse, from William Topley, a renowned photographer for $4,000. The Club would stay at this location until 1979.

Additional property on Wellington was purchased.

The Club was expanded for the first time.

The Club was expanded for the second time.

The Club was expanded for the third time bringing it to a whopping 55,000 square feet.

Well before women were even declared to be ‘persons’, a forward-thinking member, D’Arcy Scott, proposed the creation of a Ladies’ Dining Room in the Club. However, in 1923, at the Annual General Meeting, in the presence of the largest number of members to assemble, the proposal was defeated.

Women guests were permitted in the Clubhouse.

Although rare, with only 40 rejections ever documented, blackballing of member candidates was an accepted practice at the Club until 1964.

A Ladies’ Lounge was finally designed.

In 1972, the Club was informed that the federal government planned to expropriate the Clubhouse to expand the Parliamentary Precinct and construct a new block of Parliament.

After a lengthy court battle, the Crown became the legal owners of the premises in December 1973.

Finding a Federal judge to hear the court case was an almost impossible task as the majority of those eligible to hear the case were members of the Club!

We have yet to see the new block!

In August of 1979, Jean Pigott, a prominent Ottawa politician and businessperson, was the first female member accepted into membership. Unfortunately, not before a prominent group of women staged a Tea Party sit-in at the front door of the Club. This resulted in the decision of the government to not use the Club to host official functions as long as women were not permitted to attend.

Unfortunately, before the Parliamentary case concerning the seizure of the Clubhouse could be heard in court, the Clubhouse burnt down in a devastating fire on October 23, 1979.

The main relics salvaged were the front doors of the Club, the carved pediment displaying the Clubs original seal and corporate badge, with coat of arms and founding date. A few pieces of silver, some china and an Inuit carving were also recovered.

The search for a new permanent location began immediately but in the meantime, the Club called a suite in the Chateau Laurier home for 4 years.

No fewer than 26 potential building sites were considered in the search for a new home including the old Berkley Hotel on Slater, the second floor of the British High Commission on Elgin, the top floor of the Skyline Hotel and the space over the parking garage at the Chateau Laurier.

99 Bank Street was not originally considered a viable option, however, as the pitfalls of the other options came to light, it was determined that the MetLife Building would be the best future home of the Club.

By the end of 1983, the Club had purchased the 15th floor of 99 Bank Street with space totalling 27,696 square feet and an impressive view of Parliament.

A special committee was tasked with the major undertaking of turning a spartan industrial space into a Club. The new home of the Rideau Club formally opened on August 27, 1984.

A $28,000 Chandelier was imported from Britain, 12 iconic maple pillars were created by local woodworker Charlie Marshall, the dining room lighting was designed by renowned lighting expert Phil Gabriel. Yousuf Karsh, Canada’s most famous photographer, donated a notable contribution of his impressive collection of portraitures and his brother Malak also donated.

After 2 years of discussion, an espresso machine was acquired.

Financial problems beset the Country; membership at the Club declined by 25% and 3 other Ottawa area clubs folded.

A Task Force 150 was established to consider the Club’s long term viability, develop a plan of action and review policies and practices. The Committee’s work was pivotal in revitalizing the Club when similar institutions across Canada were suffering extinction.

The first speaker luncheon was held – Yousuf Karsh was the inaugural speaker.

A wine education program was introduced and the first, house-labelled wines were offered.

A concentrated effort was implemented to introduce bilingualism at the Club.

After two years of hard work by a special sub-committee, a new badge, flag and coat of arms were designed. On September 18, 2000, a grant of arms from the Canadian Crown was received and a formal proclamation from the Chief Herald occurred.

The Club introduced Visa and MasterCard for bill payments and the Club’s finances were computerized.

The Rideau Club website was launched and the library rejuvenation was completed.

Jean Pigott was the first female member to be made honourary life member. By that year, the Club had 65 female members.

The Pearson Room was renovated and the Club celebrated its 140th Anniversary with a grand Gala.

The Rideau Club burger was inaugurated and received wide attention including full-page coverage in the Citizen.

Wifi was installed throughout the Club.

iPads became available in the Library and iMac in the Billiards Room.

Club celebrates its sesquicentennial with a grand, black-tie gala.

Club life at the Rideau Club continues to remain relevant today. Creating social interaction, opportunities to meet in person and enjoy the company of one’s peers are timeless human qualities and so much more important in this age of technology where human interaction is dwindling.